„…I would like to make an introduction to the creation of our engineering company:
It is in the immediate connection to the changes from 1989 and the abolition of the established by the communist party regime of total isolation of Bulgaria from the free world.

As a Bulgarian living abroad (then West Germany) I was embraced by the common enthusiasm for new development and took part with the idea to organize a German-Bulgarian cooperation in the education area between The Hamburg University of Technology (TUHH), Harburg, The University of Architecture, Civil Engineering and Geodesy (UACEG – Sofia) and The University of Chemical Technology and Metallurgy (UCTM – Sofia) through the creation of qualification courses in German language and its inclusion in their university schedules.

This led me to the opportunity to meet my Bulgarian colleagues – professors, students, engineers from the discipline.
In the same time was opened an option for European financing for rehabilitation of existing and construction of new water- and wastewater treatment plants and installations in the water sector. Many European companies took part in the new field for engineering planning services.

After the retirement of Prof. Papazov, Dipl.-Eng. Kuzmanova was elected for Manager of the company as it keeps on growing with the same members until today. The talented Manager and valuable associates guarantee our company’s stable development…“ 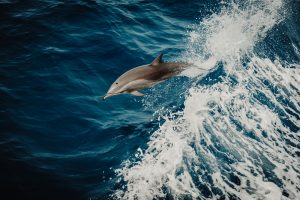 „Each individual, as well as each company in progress, as a child who learns how to walk, comes across people and events, which define their future development. But let’s get back a bit…
On a foggy day back in 1888 a ship from Boston crosses the dangerous French strait, New Zealand, an area of rocks and extremely strong streams, which caused hundreds of shipwrecks.
Within a moment the sailors noticed right in front of the bow a big gray-blue dolphin, which played around. To everyone’s excitement the dolphin seemed as to lead them through the fog and rain, and the schooner passed through the strait.

Since then onwards, the dolphin began to welcome the approaching ships and to lead them through the dangerous strait. It quickly became famous among the sailors from around the world and was named Pelorus Jack – i.e. a navigation device similar to a compass (The Pelorus Strait).

Since Jack started executing his unusual service no ship led by him shipwrecked in the strait.

In 1909 the Government of New Zealand took the official decision to protect the life and health of the dolphin. As far as it is known, this is the first individual sea creature in history that has been granted such honor by law.

And this is how was born the idea for DELPHIN company, which shall greet its clients (and their problems) and shall pilot them through obstacles to successful solutions… This story reminds me also of our cooperation with our partners and clients, and all the difficulties we have conquered and keep on winning through together… Therefore….We Thank You…“